How I Create and Maintain A Positive Classroom Culture for K-2!

Hi everyone! It's Naomi O'Brien from Read Like a Rock Star! I've noticed a lot of teachers heading back to school, and thought I'd share a few of the ideas I use to create a positive classroom culture. For years, my coworkers chalked my sweet and well behaved classes up to the "luck of the draw", but then they had to admit, it must have been something I was doing.
We, the teachers, really are responsible for setting the tone in our classroom. Our children are always watching us and how we respond to situations teaches them a lot about how they should respond to us and each other.

How I Create and Maintain a Positive
Classroom Culture for K-2! 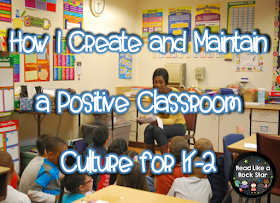 I Tell them They Were Handpicked to be in My Class, but Shhhhhh, It's a Secret: 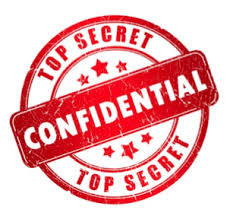 On the first day of school, I always let my students know that I have a HUGE secret to share with them. The secret is that I asked for only the best students to be in my class. I let them know that I read information about them, talked to the principal and other teachers, and that I only allowed the best kids into my room. I tell them that this is a secret and that if the rest of the school knew, everyone would be trying to be in our class and then it would get too crowded and too crazy. I let them know they can tell their parents, but nobody else. During restorative conversations, I remind them that they are still the best, deserve to be in my class, and to never forget it.
It's always really cute when we get a new student and my students are so excited to have someone new to share the secret with!

I Let Them Take Over the Classroom: 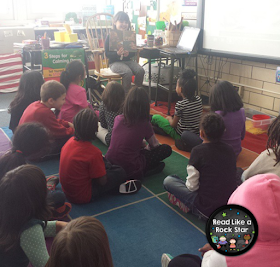 I give them a lot of opportunities to learn and share with each other. Sometimes it's hard to give up the reigns, but they learn to respect and listen to one another.  Every now and then, I pretend to be the confused one, and have them help me learn a concept. They think it's hilarious and they come together for a good cause; to teach their teacher. 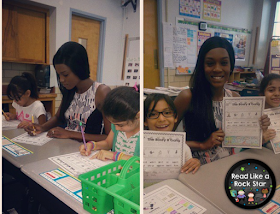 Instead of walking around or sitting at my desk, I like to sit with my students and get to know them. I let them know I'm interested in who they are, not just what they can do. It's this relationship building that makes them naturally want to behave better for me. They know I care about them, and it makes them care about me too.

I Give Them Plenty of Opportunities to Work Together: 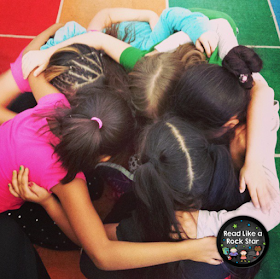 Team work makes the dream work! I make them discuss everything with each other, and collaborate often. Also, they are not allowed to tattle! Once they realize they need to work together without any help or conflict resolution from me, they learn to get along (slowly, but surely).

I Don't Allow Tattling:
I know I just mentioned that, but I wanted to bring it up again. Unless something serious happened, I ignore any and all tattles. Sometimes I say, "All you've done is let me know that you're a tattle-tale. Thank you." They learn very quickly that tattling won't get them very far and it forces them to talk to each other and work out their problems on their own. I always drive home the point that we have to look out for each other, not try to get each other in trouble. Instead of telling me that someone isn't working, they learn to nicely remind the friend to get back on task. This takes a few months to master, but it works out beautifully!

I pick 6 traits that I think will help my students excel. I make sure to make time in our busy day to teach them about these traits; usually right after lunch/recess as a "cool down" activity. I chose Kindness, Ambition, Self-Confidence, Honesty, Thoughtfulness, and Respect last year.
Think about the traits that are most important to you. Focus on the traits that you'd like to teach your students to possess. Find creative ways to encourage your students to take on these traits for themselves. I made badges for my students to earn to make sure they were aware of the traits and working on their own character. 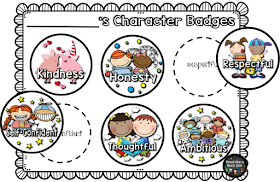 You can also post pictures of students that show a specific trait frequently in class, write positive notes about good or improved behavior you've noticed, practice acting the traits out in student led plays or skits, make class videos showing the traits, or read stories that exemplify characters that show good character traits. Make sure to point out the traits and have discussions about them. In order to create a positive classroom culture, you must truly be intentional about creating one. It's important to use your character trait vocabulary throughout the day too.

I Teach the Art of Giving a Compliment: 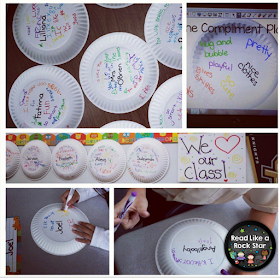 Compliment Plates were always a hit with my students! Give out plates, give out markers, have a good time! In the beginning of the year, with my first graders, we brainstormed nice compliments and I wrote them on the board for a writing support.
They loved going around filling them out, and they loved reading what their friends had to say about them. This was always followed by "Thank you's" and "You're welcome's'" being called out across the room. Even hugs were often being given out for the kind words shared. 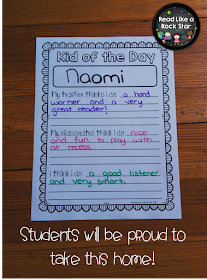 I pick a Kid of the Day to be showered in compliments! I truly believe doing this daily is one of the most beneficial activities I have done for my students.
I found that with my first graders, we had to first discuss how to give and receive a compliment. Outside of "You're my best friend", they really couldn't think of anything else to say. After a lot of discussions and practice, they were giving out compliments left and right, even when they thought I wasn't paying attention.
I also had to teach them to accept the compliment with a "Thank you". Surprisingly, some of them would say something like, "No, I'm not pretty." and really had a hard time accepting nice things being said about them. We also had to discuss that simply saying, "I know I'm cute." wasn't acceptable either...

I also have a Compliment Count on the board. It's quick and easy, and it gets their attention. (Side Benefit: It helps them count tally marks really well!) If ever anyone outside of our classroom gives us a compliment, they get a tally mark added to the Compliment Count. 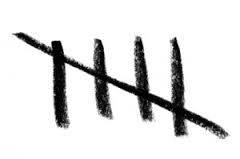 If the principal gives them a compliment, it counts for two tally marks! This promotes great behavior when they are walking in the hallways, at recess, at lunch, and at Specials.
Whenever we reached 20 tally marks, they got some of my stash. 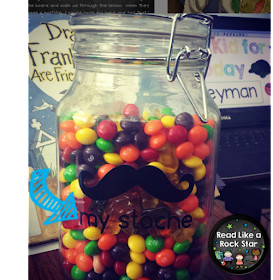 I Make My Students Reflect on their
Unsavory Behavior: 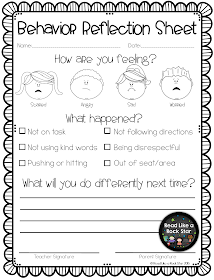 When students act out it is important to give them consequences for their actions. I believe it is equally as important to follow up with the  student through a reflection sheet. After the student has been given time to cool down, I take the time to fill this out with them, or have them fill it out themselves if they are able (only after a discussion to make sure they understand what they did wrong and what they can do differently in the future). My students so loved and responded to this that when they were sent to their seats or to a cool down area, some would ask, "Are we still going to talk about this later?" I think they appreciated being heard, forgiven, and accepted again. It's so easy to hold a grudge for the rest of the day, but we have to be the best example of forgiveness to that child and for the rest of the class to see. 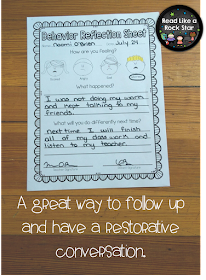 This is a resource that I made and used, but a quick TpT search will surely bring up a few freebies, if you don't have time to create one yourself!
This is also great to make a copy of and keep data on students. It’s also a wonderful way to keep parents in the loop of what’s been going on in class. At Open House, I let my parents know that if they see one of these sheets it means their student has already had consequences, so they should just discuss their child’s plan to make better choices in the future. This helps to build a parent/teacher partnership.

I Created An Outsider Looking In:
Creating an outsider to notice your class is a great way to promote a positive classroom culture. In addition to our Compliment Count that I track on the board, I created an invisible fairy friend! 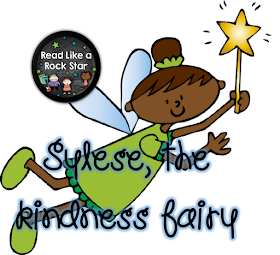 Sylese, the kindness fairy, would stop by our classroom every once in a while leaving a note, treats, and glitter in her wake. She watches the class without them knowing because she's invisible. They never know when she's watching or when she's coming for a visit. You can have another teacher write the note so your students don't recognize your handwriting.

This was basically another way for me to give them a compliment, make them feel proud of themselves, and strengthen our positive classroom culture.
This was done once a month, or once every other month. 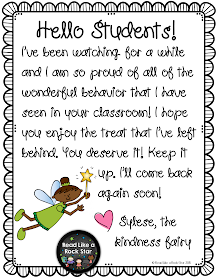 I simply leave glitter on their desks, bring in a treat, like stickers, cookies, candy, a movie, popcorn, (really anything you’d like to reward them with) and post the note somewhere in the classroom. I would usually wait for them to find it, and act like I was just as surprised as they were. Whenever it had been a while, someone always says something like, “Guys, why do you think the fairy hasn’t been back? We need to do better!” You could use anything to keep an eye on your class that leaves notes and fun treats! 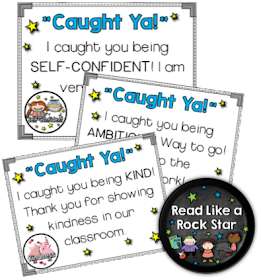 While it can be so tempting to want to always address a disruptive child right every time at the exact moment of disruption, I've learned to ignore it and focus on the behavior I like. If I have 23 students and only 1 is acting out, I'd rather give my attention and energy to the 22 that are doing a great job. I'm sure they appreciate it too. I always let them know when they are doing something that makes me happy. Scratch-n-Stickers were always a quick and easy reward. I also made up some "Caught Ya" cards to reward this good behavior and would slip them onto their desks. They could  turn these cards in to enter a weekly drawing. This was a great motivator, and usually got that one disruptive child to stop what they were doing. If not, I would pull them aside at a later time and address their behavior. Because of the way I handled those situations, even at 6 and 7 years old, the rest of my class learned to ignore those behaviors too. Some would even ask if they could help that student make good choices, which was just fine with me!
When you've got students that care about themselves, each other, and you, you've got a well oiled machine that is bursting with positivity!
I hope you enjoyed these ideas and are able to take some or all back into your classrooms this year. Believe me, you won't be disappointed. 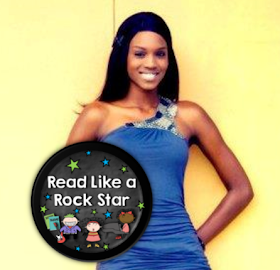 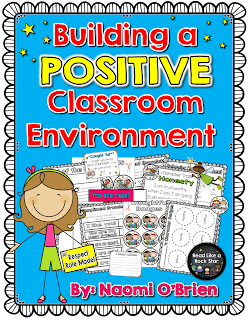 Grab this resource for your classroom from my TpT store!
Don't forget to come back tomorrow, and for the rest of the month to check out all of the other amazing ideas offered from your friends at: 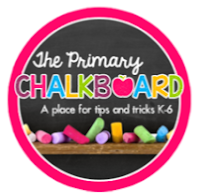 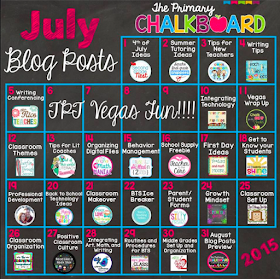